It’s all about energy (qi)

I met Connie, a shiatsu and thai yoga masseuse, one bright and sunny morning in a coffee shop in St. Paul. Literally, we had to wear our sunglasses in the coffee shop. She had called me the previous day, exclaiming that she was sick and tired of trying to design her own stuff, and was ready to take it to the next level. Of course, I was thrilled.

It turns out we both share some of the same design tastes. Both of us being from artistic Finnish families, we agreed there’s something in our blood that tends toward a simple, sparse, almost asian sensibility. I was even more thrilled that she likes my illustration style and wanted me to illustrate her stuff.

So after our meeting, Connie sent me a sketch of an idea that had come to her. The idea was a line connecting words, which I then extended into connecting to a tree. All of this ties nicely back to the idea of the flow of energy, or qi — the basis of shiatsu. 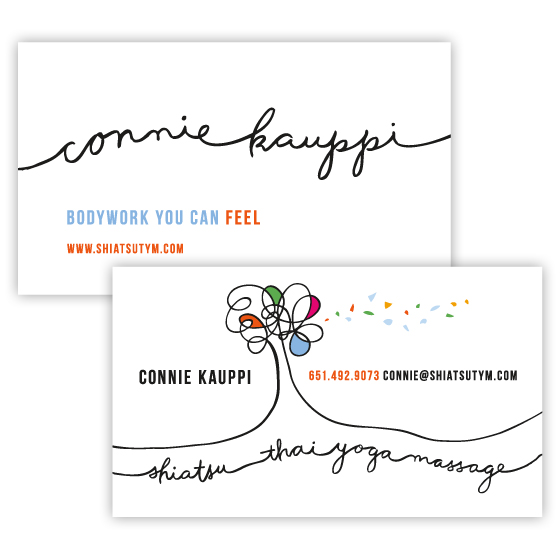 I also designed an email newsletter for her, which will be sent out soon. After she sends it, I’ll share it. Next will be her website redesign, which will also use this illustration style.